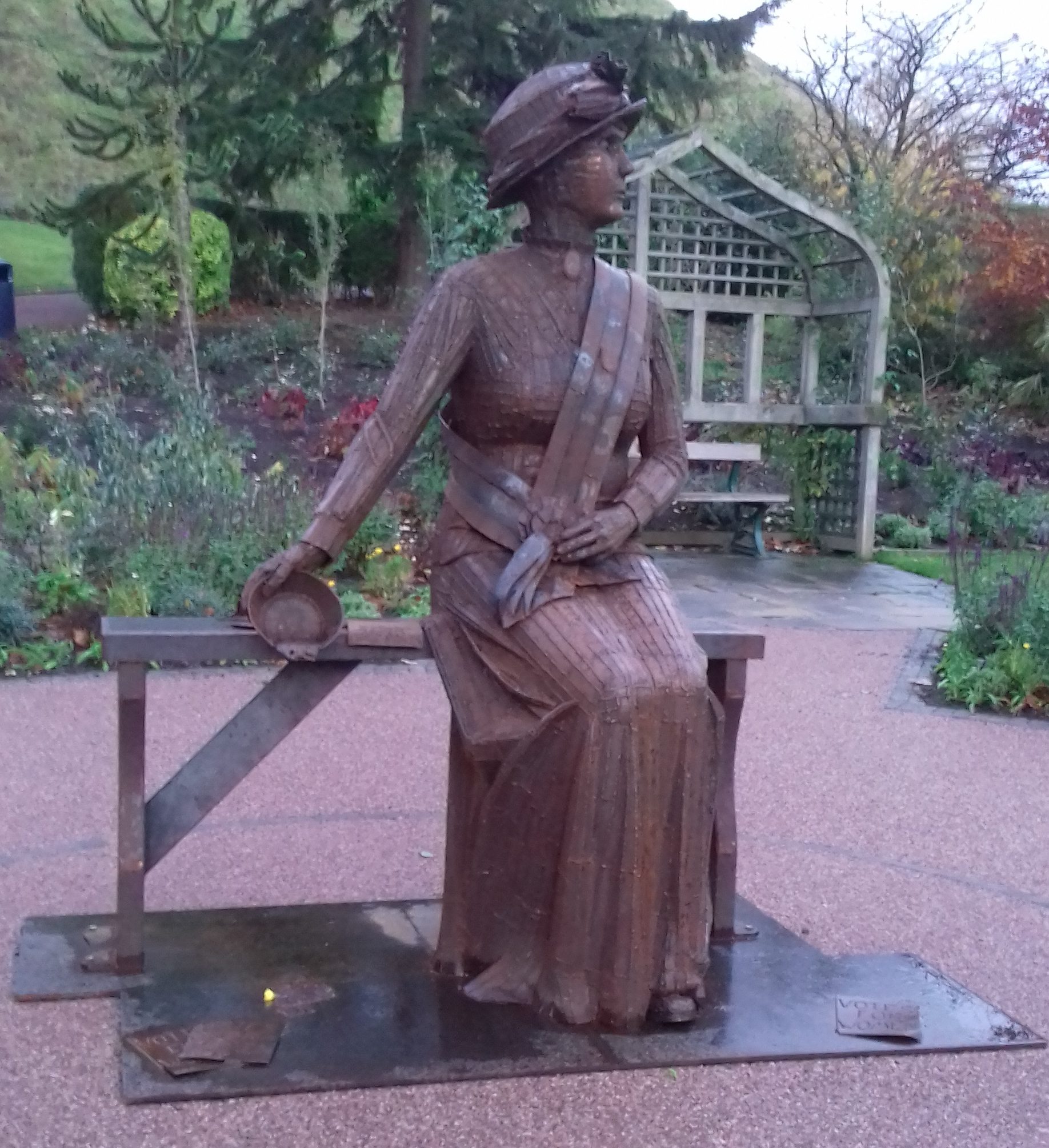 On a sunny day in spring 2021, I sat near the statue of suffragette Emily Wilding Davison (1872-1913). I watched interactions with the statue and the use of this civic space.

This public art is located in the north east of England, in pretty Carlisle Park in Morpeth, a market town. The statue is one and a half times life-size and is made from steel. Emily famously fought for votes for women.[i] The statue is by local sculptor Ray Lonsdale.[ii] The statue was erected in 2018, to mark the 100 years since some women in the UK got the right to vote.[iii]

I saw that some people had no interest in the statue at all, and some glanced as they passed by. Some took statue selfies. An older man, wrapped in a blanket on this warm day, talked to the younger woman who pushed his wheelchair. He spoke of how we mustn’t forget how women couldn’t vote. This was the only conversation I heard about the statue. A bride carefully arranged her wedding party so that the statue did not appear in any of her photographs. The official photographer excluded the statue. He staged the happy couple on the wooden arbour seat.

Items placed by other people beside the statue got more interest than the statue itself. The statue of Emily acted as a non-religious shrine. The public had left offerings and mementos.  People looked at a laminated A4 sheet of paper detailing a local school visit and their work about Emily. A coaster-sized wooden off-cut attracted the hands of toddlers. A small handcrafted slatted crate got the most attention by far. The crate was formed from wooden lollipop sticks painted green. It measured about 20 by 10 by 5 centimetres. Handwritten messages provided the final decoration. The words detailed how women did not feel safe and, the murder of Sarah Everard by a police officer in London.[iv] Women’s lack of safety is still a key issue 100 years after the suffragettes fought for equality.

The cost of the statue was met by two funders. Northumberland County Council paid £50,000 towards the statue. Morpeth Town Council paid £5000. This total might not seem a lot of money to some. Yet, in local South East Northumberland £55,000 can buy 2- or even 3-bedroom properties. I wonder how the wider local population feels about the expenditure on the statue. Northumberland ranks as 8th worst in the country for ‘“left behind” neighbourhoods’. This means many locals ‘have the worst health outcomes in England’.[v] Emily Wilding Davison had a legendary passion about equality, justice and adult education. [vi] I can’t help but further wonder what Emily would have wanted for her permanent legacy.

The recent high profile attacks on statues is not a new phenomenon. Other suffragettes attacked paintings to achieve social justice. Read about how the National Portrait Gallery responded to these attacks on works of art.

[i] Dani Garavelli, Emily Davison: Making of a feminist martyr, The Scotsman (2 June 2013).

[iii] ‘The 1918 Representation of the People Act granted votes to all men aged 21 and over and some women aged 30 and over who met property qualifications or held a university degree. In all, 8.5 million women qualified, comprising 40% of the female population’, Richard Nelsson, Manchester celebrates women gaining the vote – February 1918, The Guardian (26 January 2018).

‘While it was largely younger working-class women who grafted during the first world war and formed the activist vanguard for women’s suffrage from the 1880s, it was primarily middle-class and aristocratic women who benefited. The legislation did not remove sex discrimination or establish equal suffrage. It entrenched class prejudices designed to prevent the popular majority – the workers – from voter registration’, Rachel Holmes, Which branch of feminism won women the vote? We all did, The Guardian (6 February 2018).

Equality for women was at the heart of the suffragette struggle: Women’s Rights: A Look Back at Emily Wilding Davison’s Leadership, Oxford Human Rights Hub, 29 June 2013

Writing to Herbert Gladstone, the Home Secretary, Emily said that she and others were ‘ready to suffer, to die if need be, but we demand justice!

“The WEA’s vision: a better world – equal, democratic and just can only be achieved through an active and educated democracy. The WEA believed that in 1913 and there is much we can do today”.