Home British Art UnCanon A Voice from a Picture

A Voice from a Picture 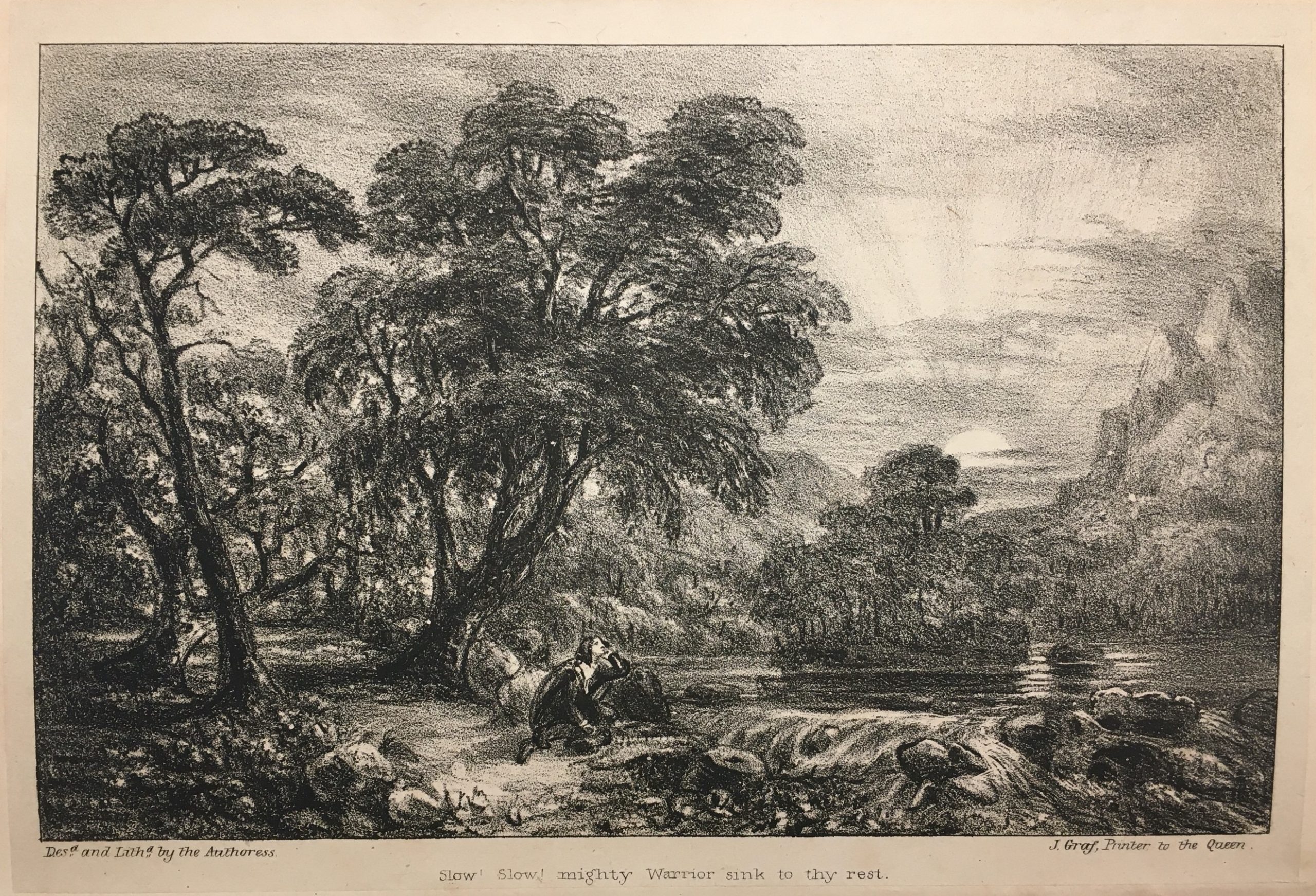 In 1839 the landscape artist Harriet Gouldsmith published A Voice from a Picture. By a Female Artist of the Present Day (London: J. Booth, 1839). The frontispiece was an engraving of a landscape, entitled Slow! Slow! Mighty Warrior Sink to Thy Rest, a line taken from the George Payne Rainsford James’ (1799–1860) novel Attila (1837).

In the foreground a male figure, perhaps James, leans against a rock, swooning in admiration at the setting sun on the horizon. The composition is built around a double aspect, with a grove of trees leading off to the left, and to the right, a lake with an island and mountains behind. This use of perspective was likely the influence of the artist John Linnell (1759–1836), Gouldsmith’s friend and informal mentor. A Voice from a Picture was written by Gouldsmith as if narrated by this landscape painting itself. The literary genre of the object narrative was extremely popular from the late eighteenth century. By using the painting as the narrator, Gouldsmith was able to shepherd the reader through the turbulent life of the object, including its creation by its ‘ill-fated parent’, the landscape artist.

Gouldsmith was a professional landscape artist, exhibiting over two hundred works in London across her career. Publishing A Voice from a Picture was one of Gouldsmith’s many entrepreneurial attempts to supplement her income. However, at five shillings a copy, with just over one hundred subscribers and the expense of printing, Gouldsmith probably only made enough profit to live off for a few months. Gouldsmith published anonymously, referring to herself as the ‘Authoress’. In addition, she designed and engraved Slow! Slow! Mighty Warrior. There is no record of Gouldsmith exhibiting a painting under this title, however if the painting did exist, it would have risked publicly identifying her as the author.

The parallels of A Voice from a Picture with Gouldsmith’s own career means the narrative can be interpreted as autobiographical. Gouldsmith penned A Voice from a Picture whilst living at 151 Albany Street, near Regent’s Park, London. The artist and her husband likely resided in the attic rooms, whilst having lodgers in the rest of the property to bring in reliable extra income. The narrative, and Gouldsmith’s personal letters, describe the artist’s studios of the 1840s as claustrophobic attic rooms with little natural light or fresh air. Such conditions had an impact on her health and it is ironic that the landscape artist was unable to enjoy the benefits of the kind of scenery which she portrayed.

The sunset imagery and title of the frontispiece, Slow! Slow! Mighty Warrior Sink to Thy Rest, allegorises the decline into art-historical obscurity of Gouldsmith’s career. Few of her works survive. Like its fictional counterpart, the frontispiece was engraved in, and therefore witnessed, Gouldsmith’s own studios and living conditions. Although inadvertent, narrating the creation of a fictional landscape painting meant Gouldsmith was adding context to her own works, providing valuable insight into the realities of working as a nineteenth-century female landscape artist.

Anon. [Harriot Gouldsmith]. A Voice from a Picture. By a Female Artist of the Present day. (London: J. Booth, 1839). Accessible here.