Home British Art UnCanon “both the past and the future”

“both the past and the future” 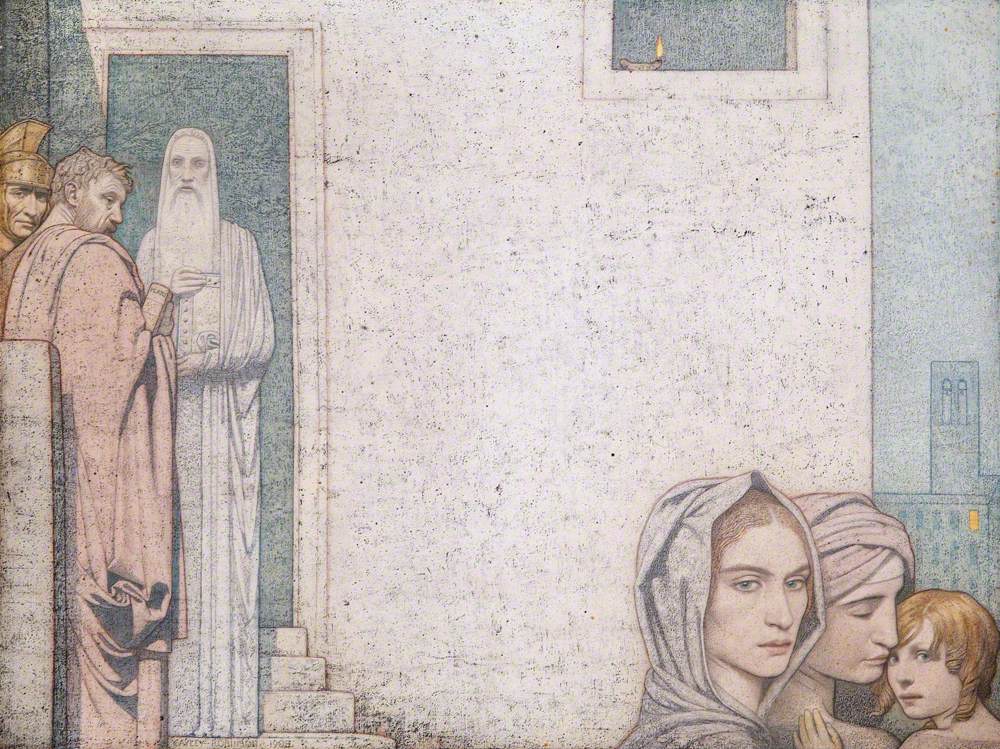 Strange figures are positioned around a large stone wall, with an open doorway and window. There is a Roman legionary soldier, a robed figure carrying a weighty, bound volume and a startling, ghostly, white male figure. He is thin, austere almost two-dimensional with a long, snowy white beard and carries a flat panel with a decorative edge. This unexplained item could be a book, or alternatively some sort of ritual, spiritual or talismanic object.

The three figures near the doorway have an enhanced outline, which gives them the effect of set-design figures, illustrative or unreal beings. Much of the canvas is empty wall. To the far right, a watchtower with one window lit and glowing. A group of figures, two women in headscarves and a child, are clustered in the bottom right-hand-corner, an unsettling motif repeated in other works by the artist. Here a young girl looks out directly at the viewer, while holding on to the protective figure who embraces her.

The ‘face of a woman’ is central in many works by the artist, acting as a medium or enabling portal for profound and transcendent themes or spiritual states.[1] An article in the magazine Orpheus from 1909/10 suggested the women’s faces may take us back in time: ‘we do not tire considering the long ancestry of expression in a face; it may lead us back through the ages.’[2] There are similar knowing faces, replete with spiritual insight, in The Three Sisters and in works by Maurice Denis, a member of the Nabis artist group in France, who the painter of this work, Cayley Robinson, was influenced by in Paris in the 1890s. However, such faces generated a fluid range of meanings and were ultimately ambivalent. Women’s looks suggest both the past and the future simultaneously, like the Roman mythical figure of Janus, depicted in sculpture as looking back and forward. This ambivalent visual motif was appropriate to the historical moment Cayley Robinson worked within, a moment of transition where people looked back to the nineteenth century and at the same time ahead to the twentieth century.

The patrician-type figure with long-white beard also features in Cayley Robinson’s painting The Renunciants (c. 1916, Victoria & Albert Museum). The figure is directly comparable with figures in European Symbolist paintings, particularly the white, solitary, elongated figure on the boat in the much-reproduced and well-known work by Arnold Böcklin, The Island of the Dead (1886) (Museum der bildenden Künste, Leipzig). Such figures suggests connections with the occult and esoteric traditions. The figure in green also reappears in several other works.

The repetition, transference and mobility of figures enhances the sense of no-space, eternity and timelessness.  This is consolidated by the painting’s uncertain location, its bleak, washed-out colour scheme, faded surface and ghostly faces, all suggesting finality and ending. Ideas of loss and waning in the arts at this time were a response to the increasing sense of anonymity in Europe’s growing cities and other changes associated with modernity. These were pertinent themes for Fernand Khnopff and other Symbolists in Europe, inspiring haunting images of the built environment executed using muted colour palettes. But Cayley Robinson’s painting speaks to these important themes as well, and is as strikingly modern, yet remains virtually unknown within British art scholarship.

This painting will appear alongside others by the artist and his peers in: Modern Pre-Raphaelite Visionaries, 13th May-18th September, 2022. The exhibition will tour to the Watts Gallery, Compton, 4th October 2022 – 12th February, 2023