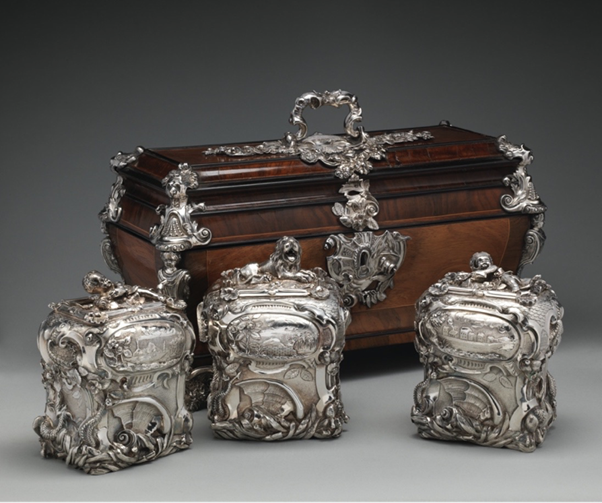 In 1732, James Dashwood (1715-1779) departed for his Grand Tour of Europe. In the middle of his travels, his grandfather died, and the nineteen-year-old succeeded as second Baronet, inheriting considerable wealth and extensive lands in Oxfordshire. After his return to England he married the very affluent Elizabeth Spencer (1717-1798) and commissioned French-born silversmith Paul de Lamerie (1688-1751) to create an elaborate sugar box and pair of tea caddies. All three of the resulting objects have two coats of arms delicately engraved on either side: one of the Spencer family and the other of the Dashwood family. Sir James and Lady Elizabeth were not only marking the union of two great families, but also publicising their socio-economic standing both in Britain and in relation to the global web of commerce the nation had spun.

The tea equipment is adorned with intricately moulded shells, assorted flowers and wave-like forms. Two putti, perhaps a metaphor for Sir James and Lady Elizabeth’s love, frolic in foliage atop the lids of the tea caddies while a roaring lion sits proudly on the sugar box. Sea dragons strain their heads upwards in the bottom left corners. The strong scaled bodies of these mythical creatures twist around the corner, their pointed tails almost touching the wings, generating the striking sense of movement characteristic of the rococo style of the eighteenth century. Fantasy meets whimsy in these luxury items designed to remind the tea guest of their hosts’ genteel lineage and of their access to precious metals and the colonial commodities of sugar and tea.

De Lamerie’s six cartouches (the oblong framing devices on the back and front of the tea-ware) attest to this story. Hand-raised and embossed on the right-hand side of the sugar box’s cartouche is a field of sugarcane identifiable by the tall stems ending in long blade-like leaves. The edges of some of the cartouches are adorned with what appear to be the tea plant camellia sinensis, its oval leaves, pointed tips and five-petalled flower meticulously depicted on the silver.

From the sixteenth century, large quantities of silver were mined in South America.[1] The silver which was not acquired by the Spanish monarchy indirectly financed the extension of European slaving, a trade in which relatives of the Dashwoods were later implicated.[2] Increased slave labour escalated the commercial cultivation of sugar in Brazil and the Caribbean.[3] This consequently increased the availability of the sweetener to the British masses and generated the wealth that facilitated access to Asian-grown tea.

There are no traces of the systems of maltreatment and exploitation that facilitated the acquisition of these commodities in de Lamerie’s design, nor of the enslaved labourers central to this history. Though these labourers were not aware of the events occurring in the Dashwoods’ drawing room,de Lamerie’s workshop or other spaces in mainland Britain, their actions nonetheless influenced those spheres. De Lamerie’s tea-ware inadvertently marks the union between them, Britain and its global web of commerce.