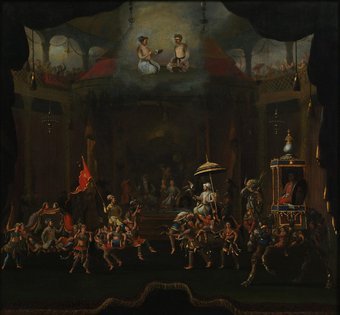 The real voyage of discovery consists not in seeking new landscapes, but in having new eyes.

South Asia and Wales have had a long liaison, stretching back to the earliest years of Britain’s socio-political infiltration of the Subcontinent. And, given Wales’ own status within the larger British narrative, the encounters have often been more collaborative (and the two have shared more in common) than the history of Colonialism would lead one to assume.

The seminars are paired as Week 1 and Week 2 and will be delivered on Tuesday and Thursday each week. You can find further details of both weeks on Eventbrite; free tickets are now sold out so please email [email protected] to be added to the waiting list.

The two seminars in Week Two have been organised with the help of Welsh literary historian Professor Daniel G. Williams and India-expert Anne Buddle from Edinburgh’s National Scottish Galleries.

The ways in which historic house collections have been acquired can be troubling and controversial to a 21st century audience. In some cases, these treasures gathered from around the world are the product of conflict, exploitation and plunder.

This seminar peeks behind the scenes at one of them: Powis Castle in Wales holds one of the most important collections of South Asian art and artefacts in Europe. The collection was gathered by two generations of the Clive family and contains over 700 objects from 1744–1803.

Presentations will explore the origins of the collection, tracing the relationship between colonialism and acquisition. It will include the gift-centred diplomacy of Robert Clive, the collecting habits of Henrietta Clive, and the self-promotion of Edward Clive through the display of Indian arms and armour.

South Asia and Wales have had a long liaison; stretching back to the earliest years of Britain’s socio-political infiltration of the Subcontinent. There have even been some academic forays into tracing the similarities between ancient Vedic myths and Celtic legends; between gods and fairies.

Yet, for all its rich-ness, this relationship – like much else when it comes to Britain’s acknowledgment of Wales – has been largely overlooked. Whilst, the Irish and Scottish connections with South Asia have been explored, there has been little concentrated study on the various cultural, religious, political and mercantile conversations between South India and Wales.

This seminar is the last in the Imperial Subjects series, and marks the beginning of the build-up to a major exhibition, featuring contemporary Welsh and South Asian artists, curated by Glynn Vivian’s Katy Freer and Zehra Jumabhoy. The seminar offers the launching pad for further inter-cultural and multi-disciplinary debates.