This research group, established by the Walker Art Gallery, National Museums Liverpool, provides a forum for the discussion and dissemination of knowledge related to Queer British Art. It nurtures relationships between academics, curators, educators and artists to support queer programming within institutions and to enhance understanding of the richness of queer British art history.

The 50th anniversary of the Sexual Offences Act (1967) in 2017 saw an unprecedented level of visibility for LGBT+ and queer artists and themes in exhibitions, publications and other media. This revealed the significant number of curators and scholars working in this area and the public appetite for programming of this kind. This research group seeks to bring together the informal networks and conversations that developed that year between curators, scholars and artists to maintain this visibility and advocate for greater research and programming in this area.

The research group focuses on both historic and contemporary art, including notable artists whose work reflected or was influenced by their sexuality or gender identity, and the networks that developed between them. The group is committed to exploring how queerness intersects with other aspects of identity, and to addressing the underrepresentation of those too often marginalised within art, art history and the queer community, including people of colour, transgender and disabled people. We seek to explore these issues through collaboration and engagement with other British Art Network research groups and other partners. 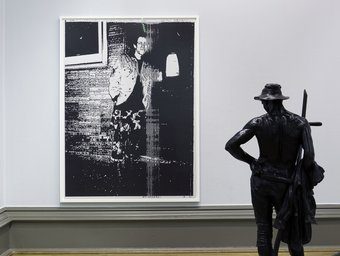